Genocidal Chants and Lies commemorating the“nakba” fraud were blasted outside NY City Hall on Sunday, May 15, 2016.

The “nakba” is the failed invasion of Israel by foreign Muslim armies, by Egyptian, Iraqi, Syrian and Jordanian forces, that began on May 15, 1948 and is now an annual “day of mourning” over the miserable defeat of their invading armies at the hands of the indigenous Jewish population.

That’s the “nakba” … when the Muslim armies INVADED Israel…

[to] celebrate Islamic terrorism and discuss who was living in Israel first: These two topics are the beginning and end of any “Palestinian” identity. And both of them involve hating Jews.

“palestine” is one long endless fraud.

FACT: “palestine” is a parasitic political entity that derives its wealth… water… electricity from Israel and gets its history… culture… its entire reason for existing from Israel.

The only ‘palestinian’ culture is appropriation.

The LIES: An exhibit in March 2012, at the Metropolitan Museum, perpetuated the HOAX of a peaceful Islamic Cultural expansion. FACT: Islamic culture is genocidal appropriation comprised of “historical” LIES and Fraud.

“… as the Muslim Invasion continues, their version of history goes unchallenged in this visible and invisible world of the 21st c. ”

The Muslim INVADERS claim that King David was a Muslim, that Jesus was a “palestinian” and that the Star of David, which long predated Islam, is an Islamic symbol.

150 years ago, Mark Twain visited Muslim-occupied Israel and wrote of “unpeopled deserts” and “mounds of barrenness,” of “forlorn” and “untenanted” cities.

Palestine is “desolate,” he concluded. “One may ride ten miles hereabouts and not see ten human beings.”

The same is true of the “palestinian” Museum which opened in 2016 with much fanfare and one slight problem: while admission is free, there’s nothing inside for any of the visitors to see except the bare walls.

“palestine” is an empty building with nothing in it.

“palestine” is a political Potemkin village. There’s a flag, an anthem, a museum and all the trappings of a country but, if you look closer, there’s nothing inside.

“palestinian” identity has no meaning or context without hating Jews. It IS ABOUT ISLAM’s HATRED of all things NON-Muslim BUT in particular all things JEWISH.

‘palestine’ has no past … no future. When the Muslim Invaders take over countries. cities. villages. churches. cathedrals. synagogues. temples. All must  accept Islam, SUBMIT or Die.

They ERASE all evidence of any history before Islam. Perpetuating the LIE that ISLAM is not the problem. The JEWS are. Israel IS.

The chants: Hudna, Hudna don’t you cry, “Fakestine” will never die” – We Want 48, We don’t want a Two State – We don’t wanta a Two- State, We want 48! – “When People are Occupied, Resistance is Justified “(followed by the ubiquitous chants) “The People United will Never be Defeated” and “Free Free “Fakestine”, “Long Live “Fakestine”.

A male speaker: “When we say we want to return, it’s not just a slogan. We don’t play any games. We are genuine about our cause and about our beliefs. Make no mistake, when we said we want “Fakestine’ to be free, we MEAN just that : “From the River to the Sea! “Fakestine” will be Free.” Let the whole world hear you. let the politicians , the Zionists walking around taking picture (I think he means ME)… the Mossad. We have no doubt that ONE DAY, no matter how long it takes, we will return to our beloved “ancestral-homeland” “Fakestine” . LONG LIVE “FAKESTINE”. It’s not over til we get our LAND back. Never Forget. Never FORGIVE. We WILL Return! Free Free “Fakestine”

VIDEO 2 – “nakba” lies outside NY City Hall joined by Communist radicals warn that “violence is necessary”.  Laura Whitehorn & Lamis Deek – Whitehorn  spent 14 years in Federal Prison. Deek is an attorney who never met a radical she didn’t want to represent.  Both in New York’s CITY HALL Park demanding the creation of ANOTHER Islamic State of Apartheid – in the Middle East- those “BASTIONS of equality!”

[00:00 to 00:48] Excerpt from Communist Radical [aka “political” prisoner] LAURA WHITEHORN was charged with “conspiracy to influence, change, and protest policies and practices of the United States government by violent and illegal means”.

She received a sentence of twenty years – released after 14. In the 60s, Whitehorn was active in the “civil rights” movement, supported the Black Panther Party, the Black Liberation Movement and the New Afrikan Independence Movement, Puerto Rican Independence and the liberation of women, gays and lesbians. Whitehorn also lists fighting the KKK and organized white supremacy … YET she was in CITY HALL park demanding the creation of ANOTHER Islamic State of apartheid – in the Middle East- those “BASTIONS of Equality!”  WHITEHORN insists that “the delegation Jews are anti-Zionist Jews .This has nothing to do with anti-Semitism. It is an national Liberation Movement.”

“Fakestinians” do not accord legitimacy to Israel. Israel is called the 48. BRING that message HERE. Stop saying Israel! Israel is “48”. Israel’s BANNED from the Land of “Fakestinians”. we must FREE “Fakestine” A “Two-State Solution” is ABSOLUTELY NO Solution. We fought apartheid. We fought racism. we fought genocide in “Fakestine” and it is our responsibility here in the U.S. to make sure that this does not continue to happen. The U.S. as we all know funds Israel to the tune of 4-5 BILLION dollars. That means in the U.S. our hands are filled with blood. We need to take a stand against it. We need to be in the streets. And we need to LINK the Black Liberation Movement AND the Liberation Movement of OPPRESSED people IN the United States – Native Americans, Chicanos, Puerto Ricans…. fight to ‘free Fakestine” . We stand here in solidarity. Every year. The crowd cheered as Lamis gave encouragement and support for violence as a necessary act of resistance (when necessary)

Re Political Prisoners: Whitehorn and Deek waxed on and on about violent felons [also “political” prisoners”] claiming they were imprisoned wrongfully. Bombs – they’re just another form of litter…perhaps… Lamis seems to think so…. As she mentions that Whitehorn spent 14 years in prison (in part) because she BOMBED the headquarters of the Israeli Aircraft Industry right here in NYC. (the crowd CHEERS). “Part of what we need to understand, people who’s Nations have been under ‘attack” have THE RIGHT- by any means necessary to DEFEND their homeland “(the crowd goes wild with CHEERS again) “In the United States- Black Political Prisoners. White Political Prisoners. Chicanos. Native Americans. We say FREEDOM to “Fakestine”. We won’t stop until Freedom until “Fakestine” is Free.“

At one point he was joined by a British fellow passing by who also challenged the “Fakestinan” LIES. This man, as well as Patriot Jim, were a huge source of irritation for the Commies and Muslims .

VIDEO 3 – “What a SUCCESS story you guys are. yeah yeah Liberal States have been great for Gays…good for gays, good for women…what a joke…you’re all so confused…44 Arab States, not enough: Yemen, Egypt, Syria, Iran, Iraq- another one and then another one- you’re a BASTION of equality; a bastion of democracy.”(Responding to a Muslim female) “Every Arab country’s apartheid. How about women’s rights, gay rights…you’re an f-ing moron. How about women’s rights?”

(The Muslima responds) “They’re Great” (followed by a non sequitur) “A 100,000 ‘palestinians’ died.” (The Brit responds as cops make him leave ), “You’re not a Liberal, you’re a MORON”. Move along-mustn’t upset the Muslim protestors chanting over and over for “One solution- Intifada- Revolution”. Translated: “Death to the Jews. ERASE “the 48, aka Israel” from the history books.

VIDEO 4 –  A couple of “Fakestinians’ claim they are the NICE guys.

The “Fakestinian” Hoax. The Fraud is dedicated to the destruction of  “the 48” (Israel) and teh LIE that the  Zionists have NO right to live on “MUSLIM” land (ISRAEL)

IN CONCLUSION. The agit-prop on the Fakestinian Facebook page :

“On the 68th anniversary of the “occupation” of palestine … as the palestinian people enter the 68th year of “dispossession” and “exile”, we call on all… supporters of “justice” and “liberation” to come together to… commemorate the “nakba”, stand against the “continuing” nakba… to call for the “right of return” for palestinian “refugees” and freedom for palestine.

… The war of 1948 …  over 800,000 palestinians driven from their homes… the State of Israel created on that land …the”struggle” for their “right to return”…. continues today.” 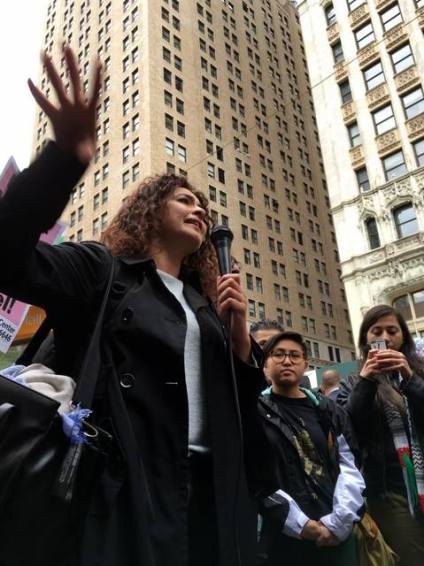 Nerdeen Kiswani of New York City Students for Justice in palestine wrote that “the rally was full of palestinian youth, which gave me an intense feeling of hope and optimism, that the next generation does not forget their history, their roots, and the right of return.

They cheered loudly whenever someone proclaimed that refugees languishing in camps in Jordan, Syria and Lebanon, don’t want to just go to the West Bank and Gaza, they’re entitled to go back to the homes they were expelled from. Back to Yaffa, back to Haifa, back to Akka. Although so many here today were people born and raised in Brooklyn, because their grandparents were displaced from palestine, they know where their roots lie and that the right of return is not just symbolic but a key aspect of the palestinian struggle.”

In Parting : There has never been any independent, sovereign “palestinian” State in all of recorded history. The “palestinian” people do not exist.

The Truth does not change. Truth is truth. If something was true 50 years ago, 40 years ago, 30 years ago, it is still true today. And the truth is there was very little confusion on this issue of “palestine”…

FACT: “There is no such thing as a palestinian people.” (the late Israeli Prime Minister Golda Meir)